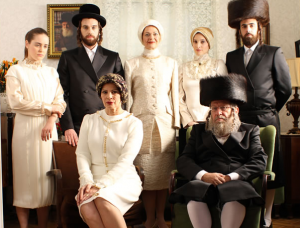 An Israeli film by Rama Burrshtein,  a Jewish Orthodox  female director, that gives the audience an intimate look inside the family of an Ashkenazie Charredi Jews that lives in Bnei Brak, an orthodox neighborhood near Tel Aviv.

It is an original screenplay about Shira, an 18 years old woman who is torn between her heart and her family when her beloved older sister, Ester, dies unexpectedly in childbirth. When Shira’s family finds out that Yachov, the widowed husband of Ester thinks of moving to Belgium with his newborn son, Shira’s mother proposes a match between Shira and the widower. Shira now will have to choose between her heart’s wish and her family duty.

This film give us a rare, sensitive, extensive and authentic look inside a Jewish orthodox family and how they arrive at decisions that attempt to keep the family intact based on their morals and values in consultant with their Rabbi and taking into account the community around them. The director, Burshtein, became the first orthodox Jewish woman to direct a film intended for wide distribution. It took Burnshtein almost 3 years to bring the movie to the screen.